These are trying times for those of us who hold to biblical values and believe God’s truth is needed for human flourishing. We are increasingly reminded that we live in a culture that is in rebellion against God and His ways.

So how should we respond to those who oppose what Scripture presents as God’s will? How should we react to the video of Dr. Deborah Nucatola, Planned Parenthood’s Senior Director of Medical Services, talking nonchalantly over lunch about harvesting and selling organs from aborted babies? How should we respond to advocates of gay marriage celebrating the recent US Supreme court decision to redefine marriage? Or when Bruce/Caitlyn Jenner receives the Arthur Ashe Award for Courage and a standing ovation at the ESPYs?

Here’s a biblical exhortation and a historical example that can help us.

Remind the people to be subject to rulers and authorities, to be obedient, to be ready to do whatever is good, to slander no one, to be peaceable and considerate, and always to be gentle toward everyone. At one time we too were foolish, disobedient, deceived and enslaved by all kinds of passions and pleasures. We lived in malice and envy, being hated and hating one another. But when the kindness and love of God our Savior appeared, he saved us, not because of righteous things we had done, but because of his mercy. He saved us through the washing of rebirth and the renewal of the Holy Spirit, whom he poured out on us generously through Jesus Christ our Saviour.

This summer Linda and I have both read Team of Rivals,
Doris Goodwin’s fascinating

book on Abraham Lincoln. It’s not only one of the most riveting biographies we’ve ever read, it’s a gives a powerful example of how to respond with wisdom and grace towards those who oppose you.

As Lincoln began his presidency, Northern and Southern states were deeply divided over the issue of slavery. Abolitionists spoke fiery denunciations of slaveholders. Many Southern leaders were equally strident in their defense of slavery.

Shortly after Lincoln was elected, several Southern states seceded.  Lincoln was regularly pilloried as a tyrant for his views on slavery and his insistence on keeping the Union intact.

But throughout the turbulent years of his presidency, Lincoln never wavered in his beliefs. He held firm to his resolve to preserve the Union. He continued to see slavery as evil. “If slavery is not wrong,” Lincoln said, “nothing is wrong.” He issued the Emancipation Proclamation and lobbied hard to pass 13th amendment that abolished slavery throughout the United States.

While he was steadfast and immovable in his convictions, Lincoln’s response to those in rebellion was magnanimous and gracious. He rejected the rhetoric of Northerners who branded Southerners as enemies. Goodwin writes, “Unlike the majority of antislavery orators, who denounced the South and castigated slave owners as corrupt and un-Christian, Lincoln pointed denied fundamental differences between Northerners and Southerners. He argued that ‘they are just what we would be in their situation’” (167).

Lincoln embodied a biblical blend of conviction and compassion. He would not change his objectives but was kind to his opponents. Even when others were vicious towards him, he was gracious towards them.

So how do we respond to those who are in rebellion against God’s Word and ways? Both the truth of Titus 3 and the example of Abraham Lincoln would call us to be unapologetically firm in our stand for truth and unexpectedly kind in our response to people.

We must speak up for the rights of the unborn and the Creator’s definition of marriage. We should seek to stir up the remnants of conscience in the hearts of those who are created in God’s image but resistant to His will. We should exercise our rights as citizens and use the democratic process to elect leaders who share our convictions.

At the same time, we must be gracious and kind in what we say to and about those who oppose us. We must not resort to slander when we receive slander. We must not hate on those who are haters.

How will we be able to respond like this? Titus 3:5 gives the answer: the gospel.   The gospel message reminds us we were once rebels towards God, deceived and enslaved by all kinds of passions and pleasures. The gospel teaches us that our salvation is based solely on God’s mercy, not our merit. The gospel promises the gift of the Holy Spirit will be poured out on all who trust in Christ. Through the empowering of God’s Spirit, we can find strength to take the high road (or walk the narrow way) as we engage a rebellious culture. 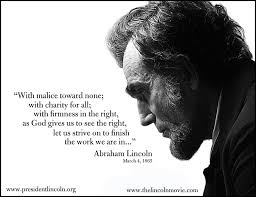 Through the empowering work of the Spirit, we can live out the words Abraham Lincoln said in his Second Inaugural address: “With malice toward none, with charity for all, with firmness in the right as God gives us to see the right, let us strive on to finish the work we are in, to bind up the nation’s wounds.”