Posted on November 26, 2019 by rickandlindareed

In two previous posts, I’ve highlighted the need for better men (Part 1) and sought to explain the first of three essential qualities of a better man (Part 2).  In this post, I focus on a second quality essential to a biblical vision of a better man.

Men are to be protective to safeguard others

It’s possible to see the decision to rescue women and children first as simply a 19th-century version of chivalry.  However, the impulse to protect women (and children) can be traced much further back than the 19th century.  In fact, it goes all the way back to the garden of Eden and God’s design for the first man.

When God created Adam, He not only placed him in the garden to “work it” but also to “keep it” (Genesis 2:15). Imbedded in the command to “keep” the garden is a fascinating hint of God’s original intent for men. The Hebrew word translated “keep” (somra) can carry the nuance of watching over, protecting or guarding.  For example, when God questions Cain about his brother Able, Cain responds, “Am I my brother’s keeper (somra)?”  Cain resists the idea that he should be watching over or protecting his younger brother.

The very fact that Adam is commanded to protect the garden, clues us into something important.  Evidently, from the very beginning, there was some kind of threat Adam was to guard against. The word “keep” implies things were not as innocent and idyllic as they seemed. In Genesis 3, we learn the nature of the threat and why Adam needed to stay on guard.  A sinister, crafty presence inhabited the garden: the serpent. There was a snake in the grass from the first days of creation. There still is.

So how did Adam do in keeping watch, in staying on guard?  Not so well.  The serpent—the embodiment of the Ancient Serpent, the devil (Revelation 12:9)—snakes its way towards Eve.  It entices her to doubt God’s goodness and disobey His word by eating from the one tree in the garden God said was off-limits.

And where was Adam when all this was happening?  Genesis 3:6 tells us Adam was right alongside Eve when the serpent tempted her.  Instead of opening his mouth to challenge the serpent, Adam opened it to join Eve in eating the forbidden fruit.  He wasn’t his wife’s keeper; he didn’t guard her or the garden.

It’s interesting and instructive to note that, while Eve disobeyed the Creator’s instructions first, God confronts Adam first (Genesis 3:10). God seems to place primary responsibility for what happened on the man.  Adam had failed to fulfill his role as a keeper.  In the New Testament, the apostle Paul spotlights Adam’s culpability for sin’s entrance into the human race when he writes, “sin came into the world through one man” (Romans 5:12).

Tragically, Adam went passive and stayed silent as the serpent hissed his deceptive lies. By being passive, Adam played an active part in the Fall.  Larry Crabb’s book, The Silence of Adam, develops the idea that Adam’s passivity has often been passed down to his sons!  Rather than being protectors who safeguard women, men have often been passive or become perpetrators.  No wonder many women have serious trust issues with men. 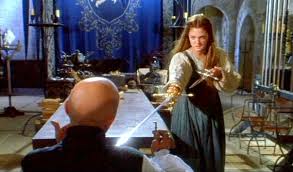 In the 1998 movie Ever After (a modern retelling of the Cinderella fairy tale) we see an interesting twist in the movie’s climax.  Henry, the handsome prince, finally sets off to save Danielle, who has been sold into slavery.  However, his heroic efforts prove too little, too late—and ultimately unnecessary.  Danielle is no helpless damsel in distress; she shows her expert swordsmanship and rescues herself from the evil master who had taken her captive.  Henry arrives only in time to offer a rather lame apology and a marriage proposal.  The movie has a happily-ever-after ending, but it also sends the message that women can’t count on and don’t need men to be their protectors.  They can take care of themselves just fine, thank you.  To paraphrase a famous statement by Irina Dunn, when it comes to making it through life’s challenges, “a woman needs a man like a fish needs a bicycle.”[2]

In the biblical narrative, the first man was entrusted with the high calling of standing guard and keeping watch, protecting what God made and entrusted to his care.  Again, this is not to say women are not called to be protectors as well.  The Bible faithfully records the impressive protective exploits of Deborah (Judges 4:1-16), Jael (Judges 4:17-22), Esther, and a host of other women.  Without denigrating the important protective role of women, the opening chapters of Genesis point to a primary responsibility in guarding and watching over given to men.  Something inside a good-hearted man will understand and accept this responsibility on a deep level.  The privilege and duty to provide protection calls forth the best part of us as men.

The implications for a discipling ministry to men include helping men understand their responsibility to safeguard others.  While some men intuitively acknowledge and embrace this aspect of manhood, others will need biblical instruction and fatherly mentoring in order to grow into their calling as godly protectors.  Selfish and fearful passivity must be recognized and rejected in favour of appropriate efforts to safeguard the well-being of others.

One aspect of mentoring men to be protectors will involve teaching them to use their strength in a godly way.  God created men with physical strength that, like many things, can be used well or badly abused.  The opening chapters of the Bible give us an account of how Adam and Eve’s first son brutally murdered his younger brother (Genesis 4:8).  In just a few generations, we meet Lamech, who boasts of killing a young man for wounding him (Genesis 4:23).  This pattern of masculine strength gone rogue becomes a tragic but familiar part of human history.  The vast majority of violent crimes are still committed by men.[3] Men will use their strength—the question is whether or not they will use it to serve themselves or safeguard others.

In his letter to Titus, the apostle Paul had a clear vision of where Titus was to focus his energies when it came to discipling young men.  After giving Titus a list of qualities to seek to instill in older men, older women and younger women, Paul instructs Titus to focus on one main thing with young men:  self-control.  “Likewise, urge the younger men to be self-controlled” (Titus 2:6).  It’s almost as if Paul is saying, if you can help men in this one area, it will affect all the other areas of their lives.  Until a man learns to control his strength by living under the Spirit’s control (Gal 5:23), he remains much more likely to misuse it. For this reason, boys and young men must be taught how to bring their strength under God’s control so that it is used to defend, not damage, others.  I am grateful for a father who made it clear to me I must never hit or abuse a woman (starting with my sisters and mother).

In addition to doing no harm, Christian boys and men must be instructed and mentored to actively look for ways to look out for the good of others. Christian men should be taught to actively seek the physical, emotional and spiritual welfare of those around them.  This vision of using strength to safeguard others helps a man grow into a better man, someone women can respect and rely on.

This entry was posted in Heritage, Leadership, Ministry Matters. Bookmark the permalink.