Chapter 18 contains the well-known message from the potter’s house about God’s sovereign power to shatter or spare nations (1-10).  Following this message of warning and hope, we see Israel’s tragic, fatalistic and disobedient response (11-12).  The Lord reacts to their stubborn rebellion by having Jeremiah deliver a message of shock and awe (13-17).  The people of Judah, who don’t like the message, make plans to kill the messenger (18). This triggers a prayer from Jeremiah asking God to take vengeance on those planning to kill him (19-23).  The Potter has power to shape or shatter both nations and individuals.

The message God gave Jeremiah at the Potter’s house helps us understand God’s power, His plans and His ways.  God has both the power and the right to do what He wants with nations (and the people in them):  “O house of Israel, can I not do with you as this potter does?” (6). Nations are not only a drop from a bucket in His sight (Isaiah 40:15), they are also clay in His hand.  He can shape their future as He sees best (4).

We also learn that God’s announcements and pronouncements of coming judgment can be reshaped into national blessing:  “if that nation I warned repents of its evil, then I will relent and not inflict on it the disaster I had planned” (8).  On the other hand, if a nation “does evil…and does not obey”, God will “reconsider” the good plans He intended for it (10).  The clay of a nation’s future is still wet and malleable–at least up to a certain point.  There does come a time when God’s patience reaches its limit and His plans become hardened (15:1-4).

The word “plans” is an important word in this chapter, occurring in verses 8, 11, 12 and 18.  The Hebrew word used for plan (חָשַׁב) has the idea of thinking, devising and intending. Both humans and God make plans. For humans, plans can be frustrated and thwarted (as was the case for the plans to get rid of Jeremiah—18). In God’s case, as the sovereign potter, no one can resist His will (Romans 9:19-21). He has the right and power to carry out His plans as He sees fit.  But in this chapter, God reveals an amazing truth about Himself:  He will alter and reshape His plans based on our human choices. History is not fixed or fatalistic; it is shaped and reshaped by a sovereign God based, to some degree, on our responses to Him.  Yet it’s clear that God already knows what our responses will be (“But they will reply….”—12). This passage helps us understand God’s apparent “change of mind” in Exodus 32:11-14 and His relenting of judgment on the city of Nineveh (Jonah 1-4). It also helps us see that the plans God has for His people—“plans to give you hope and a future” (29:11)—become realities in conjunction with His people’s obedience (“you will call upon me. . . you will seek me with all your heart”—29:13).  God’s covenantal promises to His people are ultimately certain; however, they are only experienced by those who are seeking to obey.  God’s mercies do not fail (Lamentations 3:23) but we can fail to enjoy them if we “continue with our own plans” (18:12).

Sadly, the response of Jeremiah’s contemporaries to God’s warning was to stubbornly refuse to change their plans or their ways. They persist in looking to “worthless idols” and so continue to stumble “in bypaths and on roads not built up” (15). They have left the “ancient paths” and are now wandering in a wasteland of their own confusion.  They rejected God’s admonition to “ask for the ancient paths (6:16).  The ancient paths provide “rest for your souls” (6:16); the bypaths lead to a wasteland: “their land will be laid waste, an object of lasting scorn” (18:16).  There are only two roads for the journey through life: the ancient path or the bypath.  Or in the words of Jesus, there is the narrow way or the broad way (Matthew 7:13-14). One leads to “life” and the other to “destruction.”

The response of the people to Jeremiah’s message from the Potter’s house was retaliatory not repentant (18).  Jeremiah’s message must have been diametrically opposed to what was being said by other priests, counselors and prophets.  The people want to preserve and promote what they are hearing from others, so they “make plans” to silence and ignore Jeremiah.

Jeremiah is aware of their aggressive response and prays an extended imprecatory prayer against his attackers (19-23).  He’s had enough; he calls on God to violently judge them for “their plots to kill me” (23).  He entreats God to take vengeance on the entire families of his attackers: children (21), wives (21), young men (22), older men (22).  He doesn’t want God to “forgive their crimes or blot out their sins” (23). 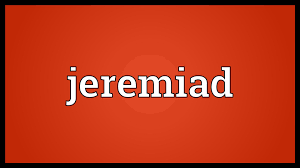 Based on what his enemies say (verse 18), it seems Jeremiah may be exaggerating their threats; they don’t speak of planning to kill him in this chapter.  However, we know from 11:21 that death threats were made against Jeremiah by his countrymen.  In either case, his words seem vindictive and vengeful.  What are we to make of Jeremiah’s jeremiad?

First, imprecatory prayers were part of the spiritual vocabulary of Jewish believers, even the pious, faithful ones (see Psalm 137). Second, imprecatory prayers are consistent with Psalm 62:8: “pour out your hearts” to God.  Anger, hurt and fury were boiling in Jeremiah’s soul; they get poured out in his prayer.  Third, Jeremiah was more emotionally expressive (or emotionally honest) than many of us dare to be.  We may have similar thoughts but don’t admit them to anyone—even God.  Fourth, these vengeful words were not the full picture of Jeremiah’s heart.  He has been pleading for God to withhold wrath from his countrymen (20).  He has wept over the promised destruction coming on the nation (9:1) and would later weep over the actual destruction of the city (Lamentations).  Jeremiah is being candid with God about his feelings and desires at this time, but this is not how feels or thinks all the time.

Can we pray imprecatory prayers against those who “repay evil for good” (20)?  It would seem so.  But like Jeremiah, we will later pull back from those words out of a God-given compassion that moves to us to “love your enemies . . . pray for those who mistreat you” (Luke 6:27-28). God’s Spirit will work in our hearts so that we obey the command to leave vengeance to God and overcome evil with good (Romans 12:19-21).