Verses 1-3 complete the grim pronouncement of punishment begun in 7:30-34.  The coming desecration of the people’s tombs is the repeated emphasis.  Instead of a proper, honorable burial, the bones of the people (kings, officials, prophets, priests and people) will be exposed “like refuse lying on the ground” (2). Why?  Because they “loved, served, followed, consulted and worshiped” false gods (2).  Those five words capture what God wanted them to do towards him:  love, serve, follow, consult and worship.

Beginning in verse 4, God indicts the people (4-7) and the leaders (8-12) for their stubborn, shameless, sinful ways.  God speaks as one baffled and bewildered by His people’s behavior. They don’t do what is normal for humans (getting up after falling down—4; turning back after wandering away—5) or animals (migrating back to their habitat like the birds—7).  Instead they “always turn away”, “cling to deceit” and “refuse to return” (5).  God, who is listening “attentively” (6) doesn’t hear words of confession or repentance (6). Instead, He sees them continually charge into harm’s way like a horse charging into battle (6).

The leaders are no better.  The scribes have used their power and their pens to mishandle the law of the Lord (8), rejecting God’s word and replacing it with their own “wisdom” (9).  They are money-hungry (“greedy for gain”—10) and lack integrity (“practice deceit”—10). Their words give false assurance and hope, treating the serious spiritual condition of the people as if it were nothing (11).  They promise “Peace, peace…when there is no peace” (11).  Soon enough, the people will find out that these promises of peace (shalom) were empty, deceitful words (“We hoped for peace but no good has come, for a time of healing but there was only terror”—15).  Yet, in spite of their misuse of their authority and position, the spiritual leaders of the people “have no shame at all; they do not even know how to blush” (12).  No embarrassment.  No remorse. No repentance.  So judgment—severe and certain—will come upon them (12).

In verse 8 the Lord condemns “the lying pen of the scribes” that has handled the law of the Lord “falsely” and have, in a sense, taken away the law from the people. The NET Bible translates (paraphrases) the verse, “The truth is, those who teach it have used their writings to make it say what it does not really mean.”  However the NET Bible marginal note recognizes that the verse is difficult to translate and could mean that the scribes work was done “for naught” (a lie) in the sense that no one believed what they wrote.  In context, I would side with the traditional rendering since in verse 10 the religious leaders are condemned for their “deceit” (same Hebrew word used twice in v 8).

This is the first reference to the scribes as an “official professional group” (New American Commentary), though earlier books acknowledge their role in compiling proverbs (Prov 25:1; also 1 Chron. 2:55; 2 Chron. 34:13).  It would seem the scribes not only copied the law, and compiled Scripture (Prov. 25:1), but also wrote commentary on it.  Here their commentary undercut the true meaning of God’s Word and substituted a “deception” or falsehood.  Specifically, they joined the prophets and priests in giving a deceptive message of “Peace, peace” (11).  Unlike Ezra, the ideal scribe, who studied, practiced and taught God’s law to the people (Ezra 7:10), these scribes were like those Jesus would later condemn for taking away “the key of knowledge” and keeping people from finding the doorway to life (Luke 11:52).

This is a sobering warning to all who teach through word or pen.  We must be true to God’s Word and not be guilty of functionally taking it away from people by giving them a false, deceptive message.  No wonder James 3:1 puts a strict judgment on teachers.

Verse 18 is difficult to translate as there are uncertainties with the Hebrew word translated “My Comforter” (see NET Bible for alternative reading of “There is no cure for my grief”).  Either way, Jeremiah is expressing to God that he is grieving and feels faint in heart about what is happening to Israel.  He hears the exiles in Babylon crying out, asking whether God is with His people in Jerusalem.  The last part of verse 19 is either God’s answer (phrased as a rhetorical question) or it could be seen as the continuation of the (faithful) Jews in Babylon (lamenting the idolatry around them). The NIV goes with the former option, in light of the fact that the exiles don’t seem all that bothered by the idolatry in Babylon. 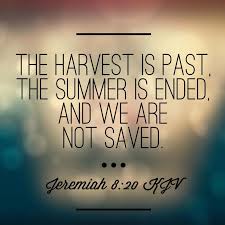 Verse 20 could be the words of the Jews or (more likely) of Jeremiah.  It’s a sad lament:  “The harvest is past, the summer has ended and we are not saved.”  The window of opportunity (harvest, summer) has come and gone.  But salvation (root word is yashag– which gives us the names Joshua and Jesus) has not.

Verse 21 shifts to the words of Jeremiah (or perhaps God).  Jeremiah (my view) identifies with the pain of his people; he is crushed that they are crushed.  No detached, emotional distance here.  He could weep unceasingly (“eyes a fountain of tears”—9:1).  At the same time, he is frustrated and fed up; he would like to bolt and get away from them (9:2).  So is the mix of emotions in a faithful minister serving a rebellious people.