Jeremiah 51 ends with the postscript, “The words of Jeremiah end here.”  Chapter 52 is a is closely modeled after 2 Kings 25.  So it would seem that another author added an adapted version of 2 Kings 25 to conclude the book of Jeremiah with a focus on Israel (not Babylon) and to emphasize how Jeremiah’s prophetic pronouncement had been fulfilled. Chapter 52 covers the same ground as chapter 39 but adds considerable detail regarding the tragic fall of Jerusalem and its aftermath.

The chapter begins with the start of Zedekiah’s eleven-year reign.  Zedekiah, who was a relative of Josiah, was twenty-one when he took the throne.  Verses 2-3 give a summary of his life and reign similar to that found for the kings in the book of Chronicles:  we are told his mother’s name (Hamutal) and God’s assessment of his reign (“he did evil in the eyes of the Lord”).

Once again we see the close juxtaposition of divine decisions and human choices as leading to the same consequences.  Verse 3 states that the destruction of the country and exile of the population was due to the Lord’s anger.  Verse 4 simply states:  “Now Zedekiah rebelled against the king of Babylon.”  From the purely human perspective, Jerusalem’s fall was the result of Zedekiah’s rebellion against Nebuchadnezzar.  However, the deeper reality is that the city and nation fell due to their continued rebellion against God.  Chapter 52 emphasizes the true causational order by mentioning their rebellion against God first.

The horrific events in this chapter are told somewhat dispassionately.  All the pillaging, killing, burning and executions are recorded in a straightforward, matter-of-fact way.  Here is another indicator that Jeremiah was not the author of this chapter.  His response to the carnage and destruction was a five-chapter lament—the book of Lamentations.  Jeremiah’s Lamentation gave voice to the human anguish caused by the Babylonian armies.

Chapter 52 serves to confirm the Lord’s word through Jeremiah; the predictions he had announced came true with agonizing accuracy.  He had announced (contra the false prophets) that the city and the temple would be destroyed by fire (38:17).  He had also told Zedekiah that if he did not surrender, he would be captured and handed over to the Babylonians (21:7).  Jeremiah had comforted him with the promise that, though he would see the Babylonian king face to face, he would not be put to the sword but would die a natural death (34:1-6).  Jeremiah had also predicted that some of the city inhabitants who survived the famine and siege would be carried off into exile (24:1-7).

All these prophetic predictions came true in horrific detail.  The city—including the temple and “every important building”—was burned to the ground (52:13).  The king, who tried to escape with some of his military officers, was captured by the Babylonian military (52:9).  Zedekiah did see king Nebuchadnezzar face to face.  He was spared being executed by the Babylonian king.  However, he watched his officers and sons be killed and then had his eyes put out (52:10-11).  As Jeremiah had announced, a small remnant of the people of Jerusalem who lived through the destruction of the city were exiled to Babylon (52:28-29).  These tragic events confirmed the validity of Jeremiah as a prophet who spoke for the Lord Almighty.  Much of the carnage could have been prevented if the king would have obeyed Jeremiah’s counsel to surrender (38:17-18).  The entire disaster could have been averted if the king, officials, and people had not broken covenant with the Lord but had obeyed His word.  All of this was preventable.

Two curious features come at its end of the chapter: the considerable detail related to the twin, bronze pillars (17-23) and the kindness shown to Jehoiachin by the new Babylonian king (31-34).

While the destruction of the temple and city are told in one verse (13), a lengthy section is given to the dismantling and the removal of the twin bronze pillars and the other bronze articles in the temple.  We are reminded of the exact size of the pillars (27 feet high and 18 feet in circumference, four fingers thick) and the ornate designs on them. (One interesting side note is that Jeremiah 52 gives specific detail about the decorative pomegranates on the capitals of the pillars; this information is not found in 2 Kings 25).  Why the extensive discussion on the bronze pillars?  Perhaps the dismantling of the twin pillars (think of the Twin Towers in NYC) was an apt picture of the dismantling of Israel and Judah.  What had once been impressively sturdy and beautiful was now broken and carried into exile. 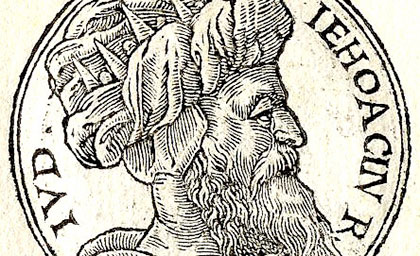 The final paragraph in the chapter (both in 2 Kings 25 and in Jeremiah 52) contains a fascinating, but seemingly insignificant, note about the fate of the exiled king Jehoiachin.  We’re told that in the 37th year of his exile (roughly 26 years after the fall of the city), the current Babylonian king (Evil-Merodach—a play on the name Awel-Marduk) released him from prison, “spoke kindly to him and gave him a seat of honour higher than those of the other kings who were with him in Babylon” (32).  For the rest of his life, Jehoiachin is given a regular allowance and allowed to dine “regularly at the king’s table” (33).

Readers are forced to ask why this historical footnote in included as the last word in the book (both of 2 Kings and Jeremiah).  My sense is that this turn of events in Babylon is included to give a glimmer of hope for the future of the nation of Israel.  Like Jehoiachin, the nation had done evil in the eyes of the Lord and suffered as a result.  However, because of His unfailing love, God was not finished with His people.  He would move an “evil”, pagan king to have mercy upon them after the years of their captivity.  They would be released from prison and once again enter a time of favour.  As it was with Jehoiachin, so it would be with Israel.  So the book of Jeremiah, which is filled with so much sadness and suffering, ends on a note of grace and hope.  God is merciful to His miserable people.  God’s promises allow hope to have the final word in the story of His people.

(I hope you’ve found this survey of the book of Jeremiah instructive.  I was powerfully impacted by the book as I studied it and wrote these chapter summaries.  In the future, I may post something similar from my studies in the book of Ezekiel).