This summer Linda and I were both deeply impacted as we read Pure Gold, David McCasland’s biography of Eric Liddell. We had been to Scotland in May and had visited Eric’s hometown of Edinburgh. We’d also taken the train to St. Andrews where the opening “running on the beach” scene from Chariots of Fire was filmed. 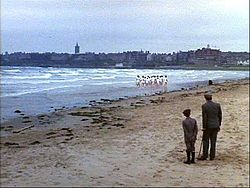 Most of the world remembers Liddell for his performance in the 1924 summer Olympics in Paris. He refused to run the event he was favoured to win (100 metres) because the qualifying heats took place on Sunday. Then he went on to win a gold medal in an event in which he was a huge underdog (400 metres).

After the Olympics, instead of remaining in Scotland and living the life of a sports superstar, he headed for China as a missionary. This part of his life story is far less known but is actually far more impressive.

While in China, Eric met and later married Flo MacKenzie, the daughter of Canadian missionaries from Toronto. The demands of missionary life and the outbreak of WWII forced them to be separated for much of their married life. When the Japanese invaded China, Eric and hundreds of other missionaries were placed in an internment camp. While imprisoned, he suddenly developed severe health problems. To the surprise and dismay of all in the camp, he died of a brain tumour at the young age of 43.

As I read Liddell’s biography, I felt an undeniable sadness in the story of Eric’s untimely death. But larger than the sadness, I felt a sense of wonder at a life so devoted to Christ and so marked by the graces of God’s Spirit. At Eric’s funeral, a close friend spoke these words in tribute:

I say that Eric is the most remarkable example in my experience of a man of average ability and talents developing those talents to an amazing degree, and even appearing to acquire new talents from time to time, through the power of the Holy Spirit. He was, literally, God-controlled, in his thought, judgments, actions, words, to an extent I have never seen surpassed, and rarely seen equalled. . . .

In the athletic world, no one knows how he did it—it remains a mystery; but for his progress in the spiritual race there is a very clear and definite explanation. First of all, absolute surrender to the will of God. Absolute surrender—those words were often on his lips, the conception was always in his mind; that God should have absolute control over every part of his life” (283-4).

I finished the biography with two growing convictions: First, I want to live more fully yielded to Christ. Eric spent time each morning in Scripture reading and prayer, drawing strength from Christ and dedicating himself to Christ. That’s a pattern I want to continue to emulate.

Second, I want to keep reading Christian biographies as they inspire the right kind of desires in my soul. John Piper is right about the value of reading the biographies of godly men and women from the past: 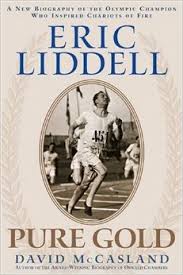 Good biography is history and guards us against chronological snobbery (as C. S. Lewis calls it). It is also theology—the most powerful kind—because it burst forth from the lives of people like us. It is also adventure and suspense, for which we have a natural hunger. It is psychology and personal experience, which deepen our understanding of human nature (especially ourselves). Good biographies of great Christians make for remarkably efficient reading.

Why not watch (or rewatch) the movie Chariots of Fire (Academy Award winner for Best Picture) which tells the story of his gold-medal Olympic run.  Better yet, why not read Pure Gold, the biography that tells the rest of the story.